The Network, in cooperation with the American Association of Orthodontists, will launch a study involving orthodontists in the latter half of 2015. The study is being led by Dr. Greg Huang, Chair at the University Of Washington Department Of Orthodontics. The project will recruit 250 orthodontic practitioners from across the nation who are interested in conducting research in their own offices.

If you know of any orthodontists who are interested in participating in a study and would like to join the network, please let them know to visit our web site to enroll online, or to contact one of the Regional Coordinators who can assist with the registration process and answer any questions.

In 2012, NIDCR awarded a $66.8 million, seven-year grant that consolidated its three regional dental practice-based research networks into one nationally coordinated effort. The consolidated initiative, renamed the National Dental Practice-Based Research Network is headquartered at the University of Alabama at Birmingham (UAB) School of Dentistry. UAB leads and oversees the six regional research sites of the network.

Recently, Science Spotlight spoke with Gregg Gilbert D.D.S., M.B.A., the National Network Director and Chair of the UAB School of Dentistry’s Department of Clinical & Community Sciences, to ask how the work is going.

We had 733 responses and almost 70% of respondents reported having heard about this procedure. This report will give the results for the 504 who had heard of oil pulling. For those respondents who were familiar with the practice, 47% did not have any patients in the past 3 months who used oil pulling as a method of oral hygiene, 51% reported having 1-5 patients who used the method, and 2% had 5 or more patients who routinely used this approach to oral hygiene.

Only 9% of the 504 had tried oil pulling themselves and only 6% recommend it as an augmentation to other forms of oral hygiene.

The most used and recommended oil was coconut oil. Other oils used include olive, sunflower, sesame, tea tree, and neem. A total of 287 practitioners reported having at least one patient who practiced oil pulling, 76% of clinicians felt it had no effect, 20% felt it improved the oral condition of the patient, and 4% felt it had a negative effect. Some respondents questioned the effectiveness of oil pulling, feeling it is a fad, or that 20 minutes of swishing with water would be as effective. More information and research on the practice was requested. Click here to view the graphs with the summary of results and a list of some literature for additional information on the subject.

Among 277 responders, 167 (nearly 60%) reported implant failures. Nearly a third of all implant failures were observed in the setting of systemic conditions in the patients, warranting a closer look at these entities. Anti-resorptive therapy has been reported by nearly 10-15% of the responders as associated with early and delayed dental implant failures. It was notable that over 120 of the nearly 170 responders who reported implant failures expressed their willingness to be contacted for additional information, important in order to build on this preliminary data. As the longevity of implants in an Implant Registry Study is explored further in the network, the results of this quick poll will help inform that workgroup.

Click here to view the table with the summary of results.

Dr. Donald Nixdorf, Associate Professor in the Division of TMD & Orofacial Pain at the University of Minnesota, will lead development of a large prospective observational study within the National Dental Practice-Based Research Network.

The study will assess outcomes of root canal treatment, and is a continuation of Dr. Nixdorf’s previous work within the Network, which includes research focusing on deterring predictors for severe acute post-operative pain and persistent pain after endodontic care.

Dr. Nixdorf will be assisted by seven investigators from Johns Hopkins University and the University of Alabama Birmingham, as well as additional researchers from the Network and Westat, a research corporation in Rockville, Md.

The Network aims to improve the nation’s oral health by sponsoring and conducting research in dental practices to improve patient care and to facilitate the translation of research findings into clinical practice.

The video below describes the results from the network study on the repair or replacement of defective restorations. 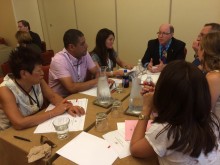 The annual meeting of the American Dental Association is one of the largest dental conferences in the world. This year the meeting was held in San Antonio, TX, near the administrative site of the Southwest Region of the National Dental Practice-Based Research Network (PBRN). The National Dental PBRN was honored to offer a program course for the first time since its establishment as a nation-wide collaborative effort. Network and practitioner representatives engaged an audience of both members and non-members in a 2.5 hour sold out presentation titled: “Practice-Based Research: How Can It Help My Practice?” Part of the presentation included a lively 1-hour discussion during which practitioners discussed the presentations and reflected on how conducting studies relevant to daily practice can help improve the practice of dentistry.

Dr. Dena Fischer, the National Institute of Dental and Craniofacial Research (NIDCR) program director for the network, opened up the presentation with an overview and history of the network. The attendees then heard from Dr. Paul Benjamin, a network member and general practitioner in Miami, FL, about the importance of practice-based research and about the latest results from a recently completed Isolation Techniques study. Dr. Walter Manning, also a member and general dentist in Albany, OR then gave an overview of the Cracked Tooth Registry study, reviewed preliminary pilot study results and discussed his experiences conducting the study in his own practice. Southwest Region Director, Dr. Thomas Oates, then joined the presenters to help facilitate one of the discussion groups. Attendees broke into facilitated groups and had fun delving deeper into the two studies presented and reflected on how the results may impact their own practices. Dr. Gregg Gilbert, the network director, closed out the presentation by discussing what studies to expect next from the network. The presentation was full of energy and valuable insight was gained by both the audience and network members.

*Note: This photo was taken prior to the COVID-19 pandemic and requirements for universal masking.

How are dental lasers used for periodontal therapy?

Dental lasers are a therapeutic option of increasing interest to practitioners. However, their role in periodontal therapy remains controversial. There are many strategies and types of dental lasers advocated for this purpose. In the network’s second Quick Poll Survey, Dr. Griselle Ortiz from Vandalia, Ohio and a workgroup interested in Laser-assisted periodontal therapy, wanted to better understand laser use by network members.

Among those who use a dental laser, a diode laser was the most common (79%), followed by Nd:YAG (13%) and ErCr:YSGG (10%). This survey had a high level of response for a Quick Poll, including 191 open-ended comments, suggesting that network practitioners are interested in the use of lasers for periodontal therapy. This survey provides insights for the Laser Protocol Development Workgroup as they address the question of laser efficacy in periodontal therapy through the National Dental PBRN. 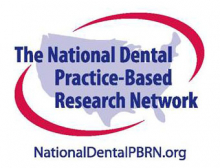 Pearl Ann Harris, BASDH, RDH, CCRP spoke to the participants of the University of Florida, College of Dentistry’s Staff Retreat on March 5, 2014.

Additionally, she stressed how the role of the National Network integrates all of the aspects of the college’s mission statement itself. “The Network provides direct research education and support to network practitioners and their staff; we teach them how to conduct research in the clinical office setting”. The Network members are offered the opportunity to “discover, disseminate and apply the knowledge they receive in the oral health sciences” to benefit their practice and the community just as the College of Dentistry’s Mission statement suggests.

The Nations Network also “fosters an environment that promotes communication, collaboration and cultural diversity…” by allowing the network practitioners the prospect of communicating and collaborating with expert institutional researchers at the University of Florida, as well as many other institutions across the United States, in order to share and design projects to further evidence based dental research through the community setting.

Ms. Harris closed by stating that many of the graduates of UF’s College of Dentistry will be future members of the Network and possibly even leaders in evidence-based community driven research projects. 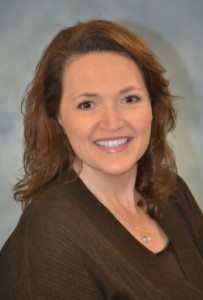 Her primary responsibility is serving as an Education and Training Coordinator for the college’s portion of the National Dental Practice-Based Research Network which fits well with her education and background. Ms. Harris has an Associate’s Degree in Dental Hygiene, a Bachelor’s Degree in Applied Science in Dental Hygiene and is a Certified Clinical Research Professional.

Her job duties include serving as liaison between clinicians enrolled in the network and the network’s administration regarding matters related to the research programs, reviewing data submissions for accuracy, obtaining initial IRB approvals and assisting in protocol preparation for some aspects of the studies. Ms. Harris also serves as the “face” of the network by visiting involved clinicians to assist in implementing research programs; she also assists in training the dentists and thier staff to do research projects in their offices.

“Ms. Harris is extremely resourceful and routinely goes beyond her job assignments to assure that the network and the university missions are successful. She provides technical support in preparing lectures and presentations delivered at national and international forums, she has been a lead author in more than 11 abstracts submitted to international meetings, a co-author in another 21 abstracts, and a co-author on 2 publications ” said Valeria Gordan, D.D.S., M.S., M.S.-Cl., professor and director for the National Dental Practice-Based Research Network at the Universty of Florida.

The Effect of Nonsurgical Periodontal Therapy on Hemoglobin A1c Levels in Persons With Type 2 Diabetes and Chronic Periodontitis: A Randomized Clinical Trial

Brenda Thacker, RDH and Deborah McEdward, BS, RDH, Regional Coordinators at the University of Florida College of Dentistry for the National Dental Practice-Based Research Network gave an informational presentation to the senior dental hygiene students about how they could be involved in the network and answered questions about careers in the research field. They spoke to the students about the future opportunities and the benefits available to them as members of the National Dental PBRN after they graduate. The students had the opportunity to learn more about practice-based research. The National Network is funded by The National Institute of Dental and Craniofacial Research (NIDCR), part of the U.S. National Institutes of Health (NIH), and as such its function is to the promote the general health of the American people, by improving their oral, dental and craniofacial health. The University of Florida in Gainesville is one of six institutions awarded a portion of a $67 million, seven-year grant from the institute. The grant has been used to create a national research network of dentists and dental hygienists.

The meeting took place on October 10-11, 2013 at the Hilton University of Florida Conference Center in Gainesville, Florida. The Meeting Overview and Presentation Highlights can be viewed in the post-meeting brochure. The July 2013 issue of the Journal of Dental Research featured an article entitled “Comparison of Ca(OH)2 with MTA for direct pulp capping: a PBRN randomized clinical trial”.

*Note: These photos were taken prior to the COVID-19 pandemic and requirements for universal masking.